Things that people say that immediately alienate and annoy me:

"I'm not really a 'cake person'."
"I love dolphins!"
"When it's fantasy football season..." (this one is so alienating that I check out before the sentence is finished)
"Do you and your husband go running together?"

Things I say that alienate and annoy others: 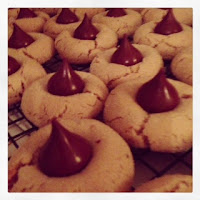 Our holiday festivities start on Monday with my family. 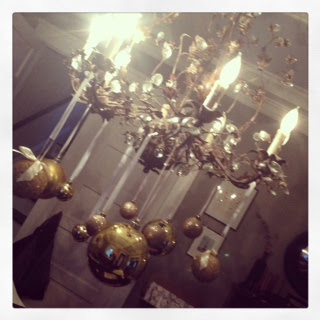 More than any other year, Christmas has snuck up on me. Which is not to say I'm unprepared. In fact, all presents are here, wrapped - including stocking stuffers for both my family and Jeff's! It just feels like we deserve another week of holiday spirit before it's all over. Edie has been an absolute delight this month. We rented The Polar Express last night and watched it for our Friday Movie Night.

Reading this book is probably in my personal top 5 childhood holiday memories - we read it frequently as a kid and I always felt like the story was super magical. I've been reading it with Edie since last year and she also loves the story. Watching the movie last night was THE BEST. I've never seen her so engaged/invested in a plot line before and I feel like anything I say to describe the experience will sound uneventful. But it was one of those unexpected parenting moments when you feel all warm and fuzzy and try to memorize the way everything looks and feels so that when you're old and telling your grown child about their childhood Christmases, you can include this story accurately.

We hung all our holiday cards today and our family cards arrived this evening for addressing. 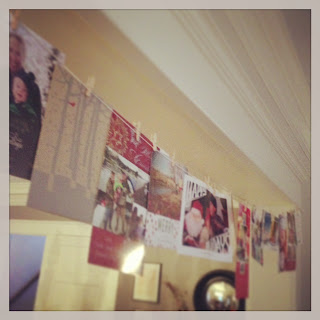 Edie had her first taste of Eggnog last night. She said she wouldn't like it, but as you can see, she had a Green Eggs and Ham moment:

Jeff is ONE LUCKY MAN

I was skimming the pictures from our August photo shoot in order to find a picture for our Holiday Card (better late than never) and stumbled on this one: 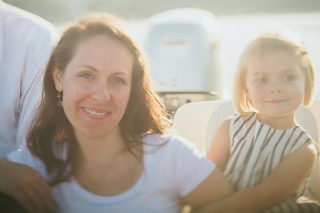 It's all dreamy and hazy and romantic and boy did they make my skin look better than it does in real life and I could not be more grateful for photoshop. I turned my laptop around to show Jeff and said, "Man. Don't you just look at this picture and think - I AM ONE LUCKY MAN?"

I mean, not all photos of me (or Edie for that matter) elicit this sentiment. For example, there's this winner taken just weeks after our formal photo shoot: 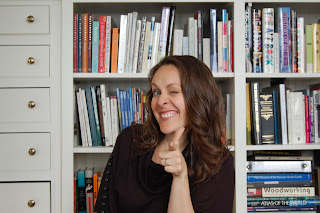 I call this one "You betcha!"And my nostrils could not look bigger.

Oh well. You win some, you lose some. 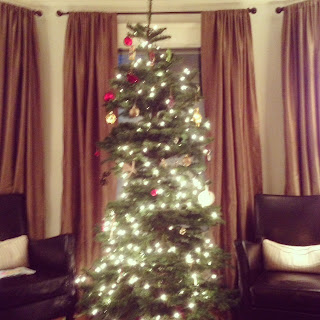 This month is flying by. We were only just able to get our Christmas tree on Friday night. The advent calendar is entering the home stretch. Menus are being planned and travel times calculated. We'll be hosting Christmas eve festivities at our house with my family and then heading north to celebrate the 25th with Jeff's family. We are mostly finished with shopping and are just awaiting all the deliveries from online purchases. Work is busy for Jeff and picking back up for me and the kittens are totally bananas. Jeff's new evening look is to sport an Old Fashioned in one hand and a spray bottle in the other; just waiting to pop the kitties when they try to slap the Christmas tree/drink water from my glass/climb the leather chair. Edie's annual Christmas cold is pending, but I'm confident that she'll wake up sick any day now.

We spent some time with Santa on Friday and Edie was A-dorable. She hugged Santa right away, and when prompted, quickly blurted out that she wanted, "Bunny slippers, a Russian Bunny, and ballet slippers." Since I'm sure Santa was a little wtf about what a "russian bunny" was, he decided to focus his energy on the request he understood - ballet slippers. Here he is demonstrating dancing on your toes while Edie excitedly clutches her Santa Pez dispenser - which incidentally was very important because she was extremely confident that Santa would think it was amazing that she had a tiny Santa that spit candy out when you pulled his head back. I love so much that I gave birth to the kind of kid who bum rushes Santa. 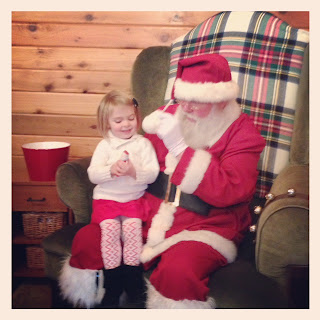 We came home from that visit to read the news about Connecticut. I really have no words. And so much has already been said by others. Rather than explore all the feelings of gratitude for my own life and terror for my child's future that it invoked, I'm opting to let others perform the post-mortem. The internet just feels too informal a place to talk about something so real. 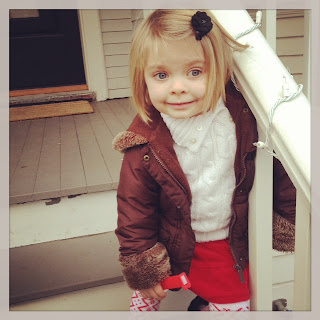 He went to Jared


While I was home working today we got a package delivered for Jeff. It weighed like 60 pounds and was clearly filled with boring paper supplies.

When Jeff got home I said something about him receiving the heaviest package ever and he told me that it was filled with my Christmas presents. I believe he said, "It's so heavy because it's filled with jewelry for you." When I gave him my you're-an-asshole face, he clarified, "Necklaces made with strings of big heavy rocks."

Everybody loves a joker.

Sorry my last post was so Negative Nancy. I stand by its contents, but it didn't deserve a 14-day radio silence follow up. Jeff says I always do this - write a doomsdayer post about how awful everything is and then drop off the face of the interwebs in an unnecessarily dramatic fashion. ME? Dramatic? Psssh. The truth is really this:

I haven't been crying into my pillow every night for the last 2 weeks. In fact, I've actually been having a  pretty lovely time. As parenting goes, children really do only give you the exact amount that you can handle - turning into (mostly) charming monkeys right after spending a week straight pooping into their hands and throwing it in your face. So after Edie finished poo-flinging in mid-November and I broke down and bought a parenting book (have I mentioned how much I hate parenting books?), she mostly shaped up. Or maybe I'm just saying that because I'm freshly home from 4 consecutive child-free nights, 3 of which were spent in a king sized hotel bed ALL BY MYSELF. Which - side bar - is never as awesome as I think it's going to be. Embarrassingly, I miss Jeff in my bed when traveling for work. Too many years spent sharing a bed with a gangly man-companion and my body is conditioned to sleep poorly in wide open spaces. Thankfully, Nyquil has recently come out and admitted to what it really is - a sleeping pill. And thus, an addiction to "Z-Quil" is born. Is it wrong how much I love the weird, druggy sleep that Nyquil gives me?  If it is - I don't want to be right.

ANYWAYS. Since this post has officially reached epic ramble proportions, I'll just take you down another tangent... or maybe a few!

I bought the book "Raising your Spirited Child" by Mary Sheedy Kurcinka and it's changing my life. For the better. Which is only the second time in my life I've felt positively influenced by a parenting book (the first being Ferber's sleep book). Mostly, parenting books just make me feel crazed and panicked. They say things like, "Ignore your child's tantrum and it will quickly fizzle." Or, "If you see your child ramping up for a tantrum, nip it in the bud." (these are both direct quotes from popular parenting books). But if the authors of these books lived in my house for 24 hours they would see that most times, there IS NO ramp up for a tantrum, and ignoring a tantrum results in an hour of epic screaming and then another hour of hiccuping and hurt feelings. It's always been baffling (and defeating) to think that these techniques aren't working for me because I'm doing them wrong. Or because my child is more poorly behaved than others. But. BUT! This book validates so many of the thoughts I've had about parenting Edie from the very beginning. Embarrassingly, this book was actually recommended to me when Edie was like zero minutes old because her passion, persistence and dramatic flare have apparently been evident to total strangers from the beginning. Without boring you to tears, the book essentially helps you to identify whether your child could be described as "spirited" and while Edie is borderline on the low end, closer to "spunky" than spirited, it nonetheless assures me that the same exact parenting techniques that work for children with an ordinary quantity of "spirit" do not work for the truly spirited child. I actually almost wept in Barnes and Noble while reading the first chapter (with relief). I'm still plowing through, but it's done wonders already in making me feel less crazy.

Whether or not my newfound parent-zen is causing a similar improvement in Edie's outlook on life is unknown, but I'm certainly grateful.

The other reasons I haven't been posting:
1. I've become completely addicted to watching old episodes of Felicity on Hulu. The nostalgia is overwhelming. The 90's were so amazing! I wore so many khakis. And there were phones with cords that were attached to the wall. And no one had a cell phone yet. Noelcrane.com! I was really hoping that some cult fan had bought that url and made a Noel fan page. No dice. Smooth-aise! Oh Sean. Mostly, I just keep having my mind blown because I am now closer in age to Felicity's parents than Felicity. In season 1 her mom says she's 38! She apparently had Felicity when she was only 20. This makes me hang my head in old-ness.

2. I traveled for work last week and was too busy driving all over town for appointments and stuffing southern food in my face to blog. I've been dreaming about shrimp and grits since coming home.

3. The kitties are always up in my business it seems. We've taken to packing a squirt bottle around the house and threatening them with it whenever they get that, "I'm about to make a bad decision face". And by "bad decision" I mean things like walking through my home-made pumpkin pie on Thanksgiving morning. 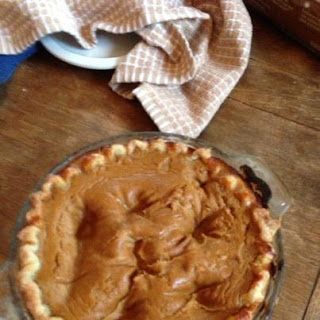 Or thinking the earring IN MY EAR is a shiny new toy.
I'm looking at you Mort. 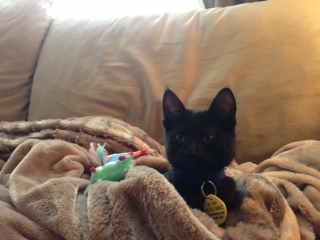 Or rescuing them from the (full) bathtub.
Again, looking at you Mort. 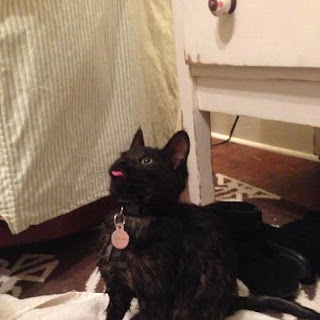 4. We have begun the tedious process of looking for a preschool for Edie next year. I've been doing all the research and scheduling tours, but then dragging Jeff with me on the actual tour. My favorite was when we showed up at 9am for one tour (without Edie - tours are for parents only) and were told to sign in and then move into the common room for "song circle" which came before the information session. You should have seen Jeff's face. Singing with 60 kids under five at 9am is maybe one of his worst nightmares.

LASTLY. I was organizing old folders on my laptop last week and found a file called "book". I had totally forgotten that I tried to write a book like 8 years ago and quit early on! It's pretty terrible, but I thought it might be fun to post excerpts here for your enjoyment. Interested?

Jill
Mother, wife, event planner, and avid reader living in Seattle. Read my erratically posted book reviews at Under The Dresser or read about my personal misadventures at Jill's Daily Note.